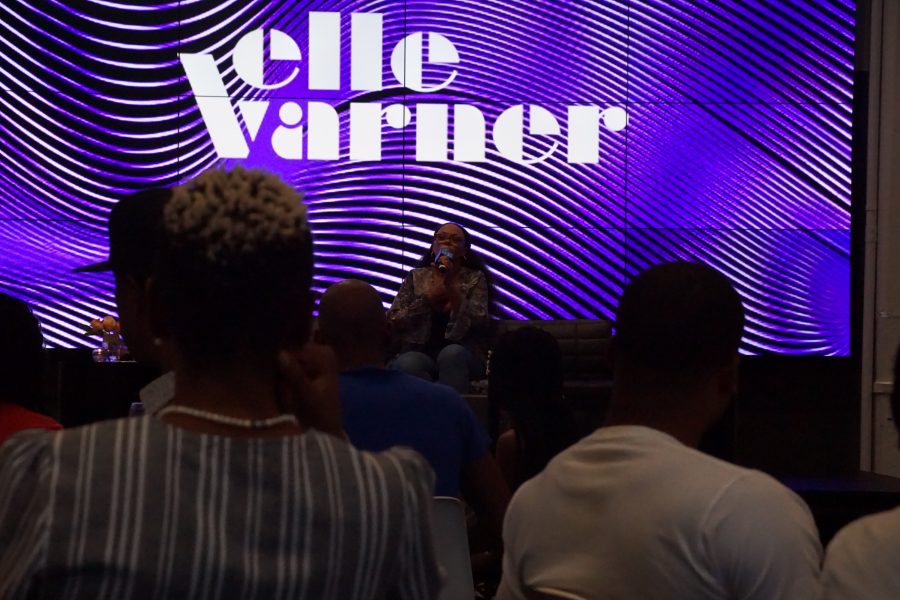 The stage is set with a leather couch, two microphones, and an interactive screen scaling the wall. The luminous screen serves as a backdrop, providing details for Sunday’s anticipated event: a consecutive installment of Sessions titled Sunday Supper featuring Elle Varner.

It’s June 30th, 5:00 PM; members wait anxiously for the event to commence. Dressed in a patterned chiffon duster, black bodysuit, and jeans Elle Varner’s presence fills the room in a subtle yet enveloping way. Sharing the stage with moderator Satchel Jester, she demands the attention of the crowd.

Guests take their seats at round tables draped in white linen, ready to soak in the intimate conversation between Jester and Varner. Elle pairs the word “love” and “rough” in a game of rapid fire. The audience “oohs” in agreeance, relating to Varner’s harsh interpretation of agape. The entertainer continues to shed a few layers, inviting listeners into her intricate mind and life experiences.

“What people think of you doesn’t belong to you.”

Elle views herself as a “regular person,” often shy and wary of interactions that force her to feel vulnerable. Varner rarely communicates her feelings through conversation, choosing to pour her emotions into her music instead. She dives deep into her journey of becoming an artist, battling naysayers during her matriculation at New York University. She endured a lack of support from particular peers, pushing her to become a songwriter and table her dreams of being an artist. Critics argued, “she didn’t fit the look,” but Varner reminds listeners that “What people think of you doesn’t belong to you.” When asked about the most significant advice she’s ever received she calmly states, “Believe in yourself… that’s the only thing that’s real”. Her personal life echoes remnants of love but also a newfound appreciation for business and money management. “Read your contract… hire a lawyer” says Varner, reminding entrepreneurs and creatives alike to avoid signing paperwork that doesn’t disclose a dollar amount.

“Believe in yourself. That’s the only thing that’s real.”

The introverted businesswoman answers a few questions from the audience before jumping into a live performance. With guitar in tow, Elle serenades guests with the lyrics of Pour Me, a soulful track featuring DC native Wale. Her vocals are astounding, powerful, and strong. The crowd roars in applause as Elle prepares to perform the second exclusive track Number One Song. This tune tells the story of a slight obsession with an alluring gentleman. He runs through her mind like a Number One Song – often, repeatedly, thoughts of him never cease. Each song serves as a solid component to Varner’s nine track EP Ellevation set to drop July 12th.

Elle ends her performance with a live rendition of the hit Refill, a testament to her hit-making ability. Her father and manager Jimmy Varner remains present for support and drops several unreleased songs via the DJ.