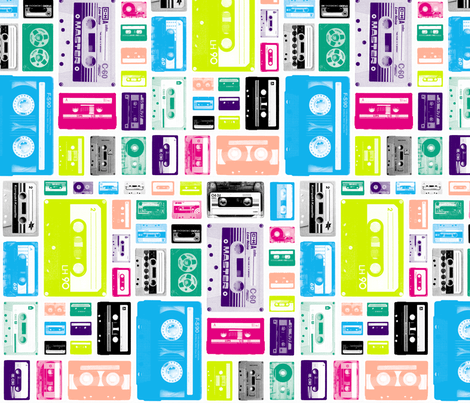 The Mixtape – A concept made popular through Hip-Hop, was a fixed compilation of popular songs evoking emotion and telling time without its creator uttering a word. Tapes always felt exclusive, a sense of underground cool. New rappers used the model to establish themselves, while mature artists used tapes to remain relevant. We’ve all been obsessed with a tape or two – so let’s dissect its history.

The
The first mixtape to hit the music scene was Harry Smith’s Anthology of American Folk Music in 1952. Smith compiled pre-released songs from 1927 – 1932. The tape was 84 tracks long – a three-LP set. It was meant to be heard the exact way he ordered each song – creating the first ever flow of tape.

Then came the cassette in 1963
The tangible cassette allowed music to be transferred hand to hand at cost. And for those who couldn’t afford to create records, it was the cheapest way for artists to distribute their own music, creating their own sounds, and shipping around tunes that buzzed in the streets but major labels couldn’t touch or control. Cars were coming with cassette players by 1968, and in 1979 the world met the Walkman – a handheld, portable player that took the world by storm.

And in 1979
The world was introduced to the Walkman, but also “Rapper’s Delight”. While Sugarhill Gang broke the mold, Hip Hop mantras before the genre’s first hit were bought and sold via cassette. Grandmaster Flash made a few thousand a selling cassettes. Artists also slipped their tapes to cab drivers, coaxing them to play their music for free while they carried passengers, “a hack to get on car radios before radio would play it”.

The mixtape goes global
Although the mixtape emerged through Hip Hop, traveling through Black communities within the United States, the art form found a home in various places around the world. West Africa fueled a do-it- wave, beginning in the early 1980s and trickling into the 2000s. African artists took full advantage of the mixtape era, copying songs onto cassettes – a cheap option in comparison to C.D. distribution. This allowed artists who shared the same language to sell tapes to their counterparts and push music .

The mixtape pioneer
But one of the greatest playlists creators is DJ Clue – a mixtape guru who began his music career as an intern for RCA Records. Through his internship, Clue would receive access to unreleased tracks and freestyles, giving him a “leg up” amongst other DJs. He would mix these tracks into his tapes and dish out heat before the artist released it – dictating what would buzz in the streets and in turn, what played on the radio. He even got access to Biggie Smalls’ Juicy – dropping it on his mixtape before Biggie introduced it to the world. Biggie was furious, but they would soon reconcile their differences. would go on to work with Jay-Z, and eventually include Biggie’s Hypnotize and Mo’ Money, Mo’ Problems on a future tape. Both tracks took over Billboard’s Top 100 – proving that the DJ had an ear for hits, and a connection to the streets that fueled platinum records. Clue went from selling tapes to signing with a major label, setting the tone for DJs to come.

But remember And1?
AND1 – a shoe and clothing company that compiled highlight videos of unsigned hoopers making major plays on courts in various cities. The company would pair these viral videos with Hip-Hop soundtracks, creating mixtapes that scored like original films. The soundtracks would serve as brand promotion and sell like , propelling the company to new financial heights.

Now, Chance the Rapper masters the mixtape
But does a cheaper method of production equate to less profit? Chance the Rapper doesn’t think so. The Grammy 25-year-old has only dropped free mixtapes in the span of 7 years. Chance is the first artist to win a Grammy without selling a physical copy of his music. The 2016 Gospel inspired Hip Hop project Coloring Book feels much like an album, snagging high profile features accompanied production – but it’s definitely classified as a mixtape. The tape did not receive major label backing – a glimmer of hope for indie artists who wish to maintain creative control over their projects while fully funding their own career. Chance has no physical album but makes his moola via digital streaming platforms, sponsorships, merchandise tour dates. Dishing out his music for free has a definite upside: reeling in the profit, -ing it up amongst his team without greedy label execs picking through the pot. Chance raked in $33 million dollars in 2017 and landed at number 5 on Forbes.