Grammy Award-Winning Producer Streetrunner Drops Gems at Behind the Beat 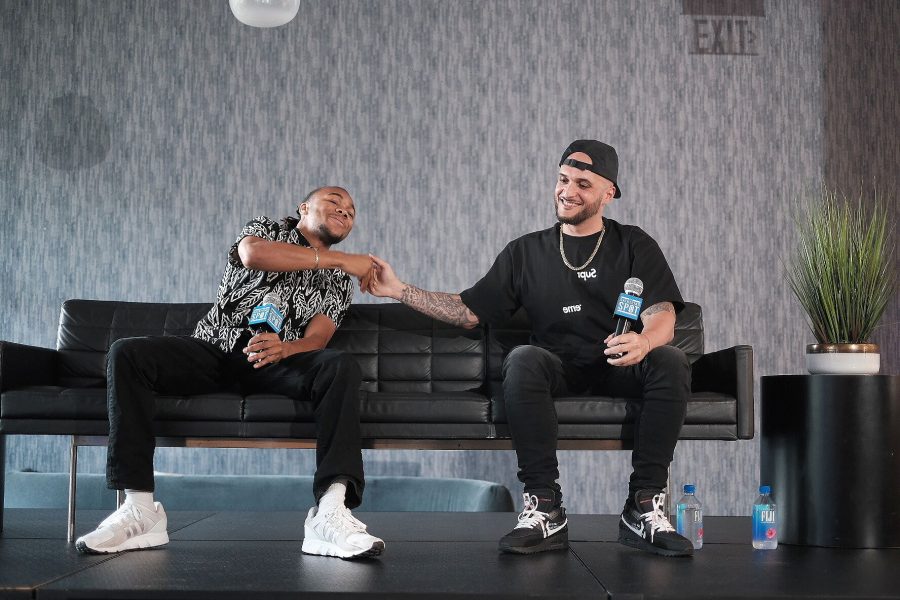 Streetrunner is known for his dedication to Hip-Hop, contributing to some of the most memorable moments in rap. His ability to craft legendary beats with an emphasis on drum patterns is exceptional, marking him as one of the world’s most notable producers. Behind the Beat invites you into the life and mind of Nicholas Warwar aka Streetrunner, celebrating his work ethic and competitive skill set.

The Grammy Award-winning producer entered Billboard’s Top 100 in 2004 with the hit single Take Me Home by Terror Squad. With 15+ years in the game, Streetrunner has impacted the livelihood of several high profile artists including Eminem, Fabolous, Ludacris, 2 Chainz, Rick Ross and more. While working with rap icon Lil Wayne, Streetrunner nabbed his first Grammy Award for production on Tha Carter III, a platinum selling album reaping 30 million dollars in record sales. Streetrunner admits his Grammy win was a complete surprise. “I never saw that coming” he confirms for the crowd, acknowledging that his lifetime goal was to receive platinum plaques, eventually exceeding his dreams once becoming a Grammy Award winner.

When asked to disclose his biggest regret, he mentions the relationship he failed to build with multi-platinum recording artist Drake. Streetrunner had the opportunity to sneak the Canadian a few rows down at the Grammys but opted to give his additional ticket to Young Money’s Mack Maine. He uses this story to emphasize the importance of building relationships, to escape the digital world and create in-person interactions. Streetrunner established a career when social media didn’t exist and a portion of his life-changing friendships began in a studio parking lot or club setting. He encouraged listeners to stray away from dm’s and engage with people directly. Build genuine partnerships with fellow artists, but don’t be “too thirsty.”

Streetrunner acknowledges the digital wave that has infiltrated the industry. Hip-Hop is filled with new sounds and melodies, much different than the beats produced in 04′. However, he’s concerned with “the lack of warmth” that exists in today’s songs. He points to Jay-Z’s Reasonable Doubt, an example of high-quality production.

“Every record that comes out is a representation of you.”

Streetrunner pulls his influence from old school tracks, tapping into the past to build a symphonic future. His favorite producers include RZA, Havoc, and Swizz Beats, all iconic beat makers. “The new guys don’t influence my sound,” says Streetrunner. “No one today influences my sound [but] my sound [is] not dated by any means.” The OG acknowledges the works of Metro Boomin and Tay Keith, but views them as competition – a chance to build off their youthful adaptations and “make it better.”

Despite his slight disconnect from up and coming beatmakers, Streetrunner invests in youthful creatives. He recently signed a producer, yearning to utilize the signee’s piano playing abilities. He surrounds himself with talented musicians that possess musical capabilities he may lack. He’s in constant search of people who encompass missing elements he “can’t bring to the table.”

Jumping into the industry as a DJ, Warwar recognized his love for music at a very young age. While attending high school, he DJ’d for various parties with no desire to attend college. Avoiding the traditional route of education worried his parents, but Streetrunner purposefully placed his back against the wall to generate mind-blowing results. He soon found himself seated amongst a group of gangsters and millionaires in Terror Squad’s studio. “Not everybody’s built for this,” says Warwar, recalling the moment Fat Joe kicked him out of his studio, sending him home to make more beats. Streetrunner returned with a vengeance, ultimately landing the intro to Fat Joe’s album. “Everybody’s path is different,” says the vet, acknowledging the inconsistencies of individualistic creative journeys.

“Respect your passion by any means necessary.”

The experienced producer admits, “my parents have no clue what I’m doing,” stressing the importance of pursuing your dreams for you and only you. Without the sincere support of his mother and father, Streetrunner learned to value himself, never selling a beat for less than $2,500. “I valued myself,” says Warwar, refusing to lease his beats for mass consumption. He studied money management techniques that have allowed him to flourish. “Until you build your royalties” you may go months without reaping the fruits of your labor, but you must “respect your passion by any means necessary.”

Streetrunner is a perfectionist, a master of music. He engineers his beats to avoid the interference of unwanted sounds. “Every record that comes out is a representation of you,” says Warwar. Each “cook-up” is his child, and he never allows an engineer to alter his beats drastically. “You can’t put your beats in the hands of other engineers… they’re like your babies”.

Nicholas Warwar encourages everyone to release fear and pursue their true passions relentlessly. Keep going despite adversity, and honor the course of destiny. His most recent contribution to the game includes DJ Khaled’s Higher featuring Nipsey Hussle and John Legend. The track peaked at number 21 on Billboard’s Top 100. Warwar closes the conversation, reminding attendees “If it’s meant to be it’ll be”.