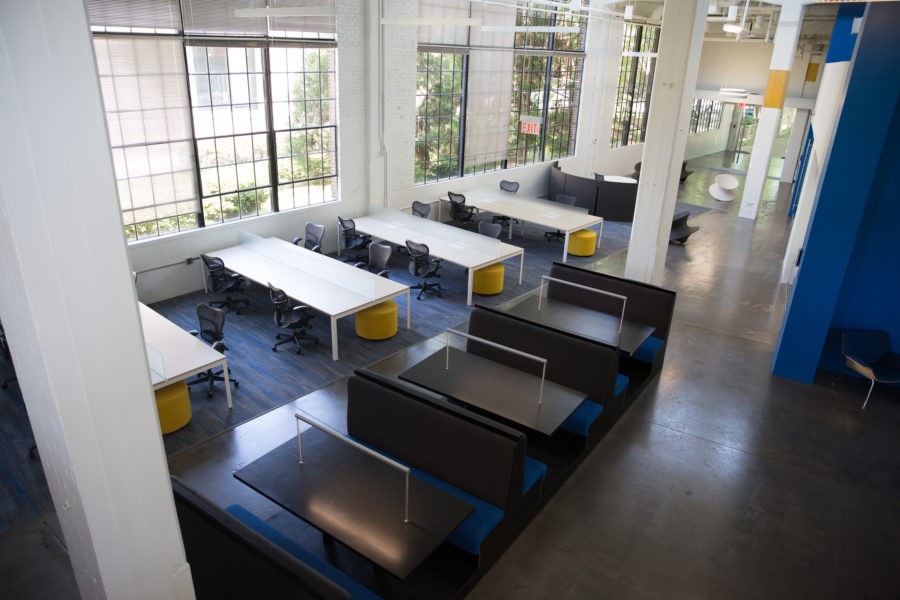 The Gathering Spot, Switchyards will bring business professionals together

Two modern facilities are harkening to the past by renovating historical buildings to usher in the future through members only clubs that provide workspaces, event spaces, restaurants, coffee shops and places for business people to meet and share social and cultural experiences.

The Gathering Spot, which describes itself as the city’s “modern business and social club” is set to open this winter in the Northyards development near Georgia Tech, just off North Avenue.

The Gathering Spot will be located in a 20,000 square-foot former rail car turnaround dating back to the early 1900s and will include three major components: an event space, a bar and lounge area including a restaurant, and workspace.

“We want to connect people from all walks of life under one roof,” said Ryan Wilson, co-founder of The Gathering Spot. “Our space from a membership perspective is little younger, if you think of the Buckhead Club and Commerce Club.”

Renovating the space is costing in the range of $3.5 million; the company leading that design and renovation is Gensler, a global design firm with 46 offices worldwide.

“What does a gathering mean? It can mean anything from two people to 350 people. We are using that scale in the design,” said Teyanna Miles, an associate at Gensler and lead designer for The Gathering Spot project.

With the idea that different gatherings mean different sizes with different needs, Gensler is ensuring the various spaces reflect the many ways people meet together, she added.

Even with the open and large event space and the intimate booths in the restaurant alongside the private meeting spaces, Miles promises there will be “continuity that runs through the entire space.”

Gensler is also paying homage to the historical quality of the former rail car turnaround.

“Atlanta is here because of trains,” Miles says. “We are taking the beauty of the raw space and bringing a sophistication level to it.”

Wilson, a lawyer, has traveled numerous times to Washington, D.C., and grew up in Atlanta.

“I’ve been to a number of city clubs and was really in need of one place to go to consistently,” he said.

Having a restaurant and lounge, an event space and workspace all together under one roof will meet a need in Atlanta by providing millennials especially a place to, well, gather.

“After meeting in every coffee shop and restaurant, I wanted there to be a permanent home for every professional,” he said. “This is a place to where you’d want to go and connect with folks.”

Switchyards, which is branding itself as a “Downtown club for design-focused doers,” plans to open in December in a renovated space on Spring Street across from the Tabernacle music venue.

Mike Tavani, co-founder of the popular startup and highly successful Scoutmob, is planning to make his mark in a new arena – renovating a space for designers and startups to come together and create that he has named Switchyards.

The 20,000 square-foot building in the heart of Downtown dates back to 1928 and melds a passion Tavani has for old buildings and nurturing new ventures.

“I’m excited to put this building on the map,” he said.

The idea of providing a space for design and brand startups together started with Scoutmob about six years ago and meeting with founders at Octane coffee shop, he said.

The members, and the businesses, in the space are not household names. And that’s how Tavani wants it.

“They are small but they care a lot about brand and design,” he said. “Ultimately the goal is to get the best founders in the city into one building.”

Switchyards is unlike other workspaces, however, said Tavani. Whereas other workspaces will seek out various businesses, Switchyards wants to be an incubator for new ones, again focusing on design and brand – something not provided elsewhere in the city.

“I would never call Switchyards a workspace. Switchyards is heavily focused on design and consumer startups. What we care about is helping accelerate actual startups,” he said.

To that end, Tavani’s partner at Scoutmob, David Payne, has stepped down as CEO of Scoutmob to join the Switchyard team to head up Switchyard Studios. This arm will be in charge of launching companies that are created within the walls of the historical building.

“I’ll continue to focus on the building but Dave will focus on the studio. Obviously we will have lot of programming on events,” he said. “People said two years ago Atlanta is not a design town but this building will prove it is.”